Mighty oak was reborn in an impressive work of art.

A few years ago, a storm overthrew the mighty oak which had been counting for more than 350 years, growing near the Vilnius-Zarasai road. This oak, which distinguishes the town of Ignalina and the village of Beciunai, was included in the List of Protected Cultural Heritage.

Elder Jonas Polito took the initiative to "raise the oak" along with the history of the village. One of the most famous folk artists of our country, Svajūnas Rimkevičius, came to his aid, whose impressive works adorn not only the country parks and private homesteads, but also scattered around many foreign countries. The Master had the purpose of giving the sculpture the name of UNIVERSE. And he succeeded. The sculpture depicts all that the land of Ignalina lives on: water, sun and moon, trees, owls, serpents, eagles, swans, grasslands…

The 7-meter-high sculpture, weighing more than 7 tons, returned to the same place where the oak grew, and on October 12th. was solemnly unveiled, consecrated and presented to the public. 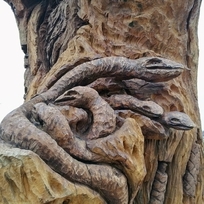 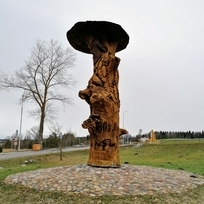 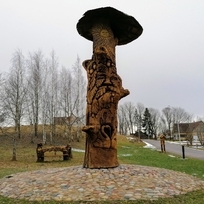 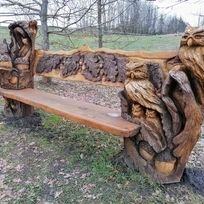