Created by nature, observed by man.

New object of interest - stone HE'SAS in Daugėliškis region!
History of the formation of the stone HE'SO:
2019 May 15 a young man, wanting to get to know the bottom of the Dysna River more deeply, decided to break into it near the Padysnis hydroelectric power plant. Climbing, he slipped on a sharp-edged stone that he decided to pull ashore. To his surprise, it was not a simple stone, human facial features looked out of him. "I'll call him HE'S," he shouted. Thus was born a new object of interest in Daugėliškis region, which was made meaningful by "Dirbtuvė Krapštukas" and the community of Daugėliškis region.

Nearby is the still operating Padysnis hydroelectric power plant, built in 1958. 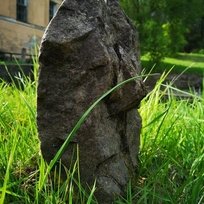