Monument to Ignas and Lina

The sculpture was built in 1993 June 16th on the shore of Lake Paplavinis. Author of sculpture is  Gintaras Černius.

The 5 meter high oak sculpture consists of two interconnected parts, with metal suns at the top.  Ignalina's legend (Ignas and Lina story) is carved on the other side of the sculpture.

While celebrating the 150th anniversary of Ignalina, the statue was renewed, but perhaps it would be more accurate to say that the statue was newly created and built in place of the former, because the time and weather mercilessly damaged the old one. The true creator, as you know, can not create completely identical works. So the oak sculpture, which depicts Lina and Ignas story, Perkūnas lightning, and the buildings of Ignalina, which appeared above them, with beautiful, sun-shining towers, was made similar, thought slightly different one. Ignalina residents and city guests now enjoys the work of the artist, which is very expensive, exclusive and meaningful to him and his family. 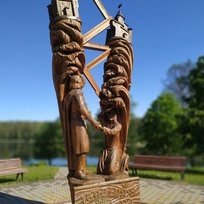