Monument to three unknown Lithuanian partisans.
2014 In September 2004, the Lithuanian Genocide and Resistance Research Center (LGGRT Center) commissioned archaeologists to exhumate partisans who died in 1944 in the village of Miskiniškės in the Kazitiškis eldership of Ignalina district. in December.
Fragments of the remains of three people were found in the coffins during the exhumation of guerrilla remains. It is likely that remains were still present in the fire station, but they were scattered when plowing.
2015 May 17, commemorating the Day of Partisan Honor, Armed Forces and Society Unity, Swedenswald Three unknown guerrillas, who died in Miškininkė homestead in 1944, were solemnly buried in the cemetery. on the night of December 28th.
2017 LGGRT Center in Swediskes erected a monument to three unknown guerrillas to commemorate Partisan Day of Honor, Army and Society on 2018. 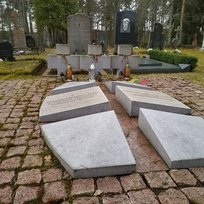 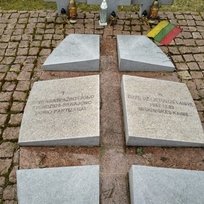 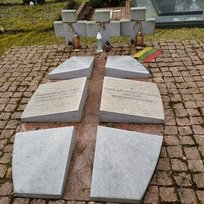