Sokiškių mound with settlement, Juodėminis Kalnas - hill fort (unique object code MC 1979; list of cultural heritage list No. AR196 of the Republic of Lithuania till April 19, 2005 No. A1513K) and settlement (unique object code MC 24757) Ignalina district municipality territory, east of Sokiskiai, Dūkštas eldership. The hill is located on a separate hill on the shores of Saman Lake. The site is oval with a raised middle (55-65 m in diameter), oblong north-east - south-west, 68x56 m in height, in the middle, 4 m in the south-eastern part. The slopes are steep, from 4 meters high in the west to 22 meters. The mound was long ariam, the upper part of the cultural layer was destroyed. Now it's dirty.

To the south-southwest and north-west of the hill-fort in the area of ​​6 hectares there is a foot-populated settlement where rolled, flattened and rough ceramics, bone slices, and clay slivers were found.

1958 The Institute of History studied the castle mound. The references are protected by the Lithuanian National Museum. [2]

1980-1983 Elena Grigalavičienė explored the vast part of the mound site - a total of 1115 sq.m., and found a cultural layer of up to 2 m in thickness with a variety of findings: stone blocks and axes with a hole for a bird, slag, animal bones, dash, iron, rough ceramics, bone work. Plots in the north-west - northeast of the country are found at the top of 2-3 m wide, to the bottom of the 1.5 m wide underside dit that was poured 2 m wide at the base, to a height of 0,7 m and a second 5 m wide , up to 2 m deep grooves. On its inside was a wooden barrier. These assemblies were likely to put up the entire area. The 1.7-meter wide gate was installed at the northwestern site, with a 5.5 m long row of pillars mounted from the fence to the sides to the sides. The first wooden structures of the pillar structure stood closer to the center of the site. They burned down, and new ones were restored near the edge of the site, where the former ditches were leveled. After the burning down of the latter, the castle mound defense facilities were reorganized: an outer ditch was laid out, slopes were built, and a lot of exteriors expanded. From the clearer remains of the buildings, a 5x3.5-meter-square quadrilateral has been discovered, which has grown to 1 m. Metal tools have already been used in the last period: knives, yarns, brass jewelry: bracelets, chains, scarves and scarves. 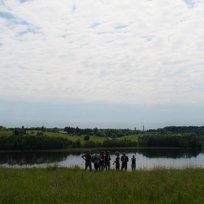 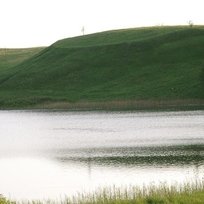 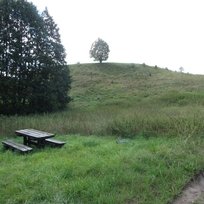