Vidiškės manor house was first mentioned in the second half of  XVIIIth century (1782, 1784). Manor then belonged to Mr. N. Ragoža. In 1782, after receiving permission from the Vilnius Diocese, Mr. Ragoža built the chapel in it. In 1807 the manor was ruled by Count Ludwig Pliater,who in the same year built a new chapel and the manor that was called Pšijazn. There were 19 household buildings and outbuilding: one-storey, classicism style, wooden mansion palace, 6 houses for manor workers, a mill, a sauna, a barn, 5 sheds, a forge, a granary, an ice house.

The Vidiškės Manor classical style ensemble, was reborn in the XIXth century and is considered an East-Aukštaitija gem. A spacious hall, a couple of lively banquet halls, an authenticly equipped 20 guest rooms, a lovely library was restored at that time. The rooms of the palace are furnished with Baroque, Rococo and Ampire-style furniture. On the southern side of the palace there is one of the most beautiful terraced parks in Lithuania, unique in the fact that it is surrounded by ponds and has a hundred-century old poplar lane, which is located near Lake Varnis. The restored main manor ensemble consists of the following nineteenth century buildings: sauna, garden, adventure, ice cream and bravoras. Vidiškės Manor is the object of cultural heritage protected by the State of Lithuania. Vidiškės Manor Park is a Local Natural Monument (1986). 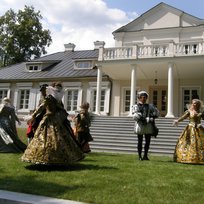