Vidiškės chapel was first mention in 1675. The owner of the Vidiškės estate, Jonas Kaminskas in 1828 built the church, later in 1840 renewed. At that time in church worked priest Silvestras Gimžauskas, who was famous Lithuanian culture educator. Masonry church was built and sanctified in 1906. 1933 Priest Zigmas Žeidys repaired the church. Only from 1938 mass was started to be held in lithuanian language. The church is a neo-gothic, cross-plan, one-sided, with lower abyss, towers. The applied art of the Church (2 Dalmatians and Arnots) is a cultural monument. 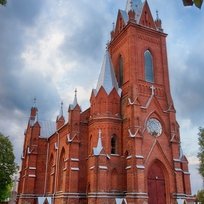