In Gedžiūnėliai in 1921 a chapel was built. It was an elongated house with a gable roof, an entrance door at the back, and windows divided into three parts. Until 1931 prayer services were held once a month.

Archbishop Romualdas Jalbžikovskis allowed the establishment of the parish on condition that the prayer services will be in Polish. Since 1931 prayer services were held regularly. In 1939 The pastor of Daugėliškis Petras Budra moved to Gedžiūnėliai, therefore for some time the chapel performed the functions of Gedžiūnėliai – Daugėliškis parish church. Then began a construction of the new church. Due to poor health, priest P. Budra asked to be transferred to another parish. Through the efforts of priest Karolis Gumbaragis in 1941 was founded the parish and in 1943 a new church was built, adapting the building of the old chapel. After 1966 the church was restored and painted by the care of priest Jonas Kardelis.

The church is in the shape of a traditional living house, rectangular in plan, single-tower, single-nave. A building with a bell tower, a three-walled apse, and a sacristy. The front facade is oriented to the southwest. The main entrance is located at the front of the building, through a glazed veranda. The churchyard is surrounded by the stone fence with an iron gates. 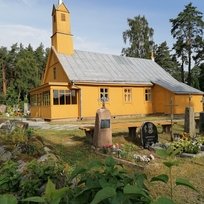 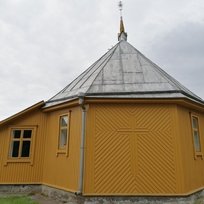 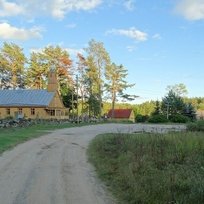