The project "Ignalina is ARTi" donated three works of art to the people of Ignalina and guests of the city, which will be constantly open to the public.

From the wall of the Ignalina Cultural Center, you can see from afar the expressive work of the artists' brothers Algirdas and Remigijusipseckai, created especially for Ignalina. The artists were inspired by the idea of this drawing, the myth of the town about the love of the Crusader Ignas and the Duchess Lina and the synthesis of the symbol of Ignalina, the water lily.

According to the authors, the lily floats on the surface of the water, as if on a thin line between oblivion at the bottom of the lake and the focus in daylight. So, with this drawing, the artists wanted to bring the beautiful urban legend to the top with lily-shaped balloons, remind people, inspire discussions about what it means to the townspeople, how we can further preserve and nurture this myth, build on it, as on a foundation, the identity of our land. At the same time, colored balloons symbolize the celebration. A celebration of love depicted with sensual figures of Igno and Lina. Another symbolic aspect of the drawing is the sacral spice seen in the figures of loved ones. This is a reminder of the depth of traditions, history, legends and the feeling of love and the importance of nurturing and preserving them.

The wall was decorated by the best representative of the neo-fresco genre in Lithuania and one of the pioneers Tadas Vincaitis - Plūgas. 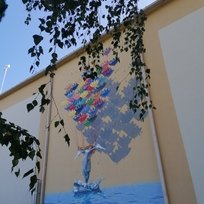