Sculpture for a Maltese Volunteer

Ignalina is one of the three cities (Vilnius and Vilkaviškis), where the Maltese Order Helpdesk groups were first established. Its long-term head is Vidutė Ektienė.

At the celebration of the 150th anniversary of the Ignalina group, the idea arose: to build a sculpture - as a gratitude to the Maltese sponsor, as a reminder to Ignalina that there are people in need in the city, as well as in the whole area, as a gift to Lithuania to meet its 100th anniversary.

The sculptor is Ignatian Theophyll Patiejūnas. Apparently, this fact, and also the memory of the blessed Theophilus Matulion, led to the sculpture being "baptized" in the name of Theophyll.

In Lithuania this is the first sign of gratitude to Maltese.

Presenting the sculpture, V. Ektienė wished "Let it be a gift to Lithuania, welcoming the anniversary of the restoration of its statehood, it will be a reminder to the ignalinists that they need to see, feel the misery of another and, if possible, help." 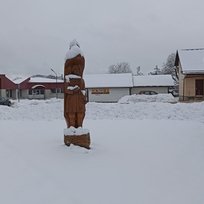