"Let's open the shutters, / Let everyone see / Grandma drinking tea ..." is a line from a poem written by Indrė Gruodienė on the occasion of the closing of the art plein air "Let's open shutters", the head of the Daugėliškis region community and the organizer of this plein air.

2021 On July 20-24th, seven artists participating in the plein air painted the shutters of the Daugėliškis community building. Not only did they paint, but they also communicated, traveled, tried to get to know the town and the district. Dalia Pajėdienė, an artist from the Tverečius region, Nijolė Trinkūnienė from Ignalina, Sigita Klemkaitė from Rokiškis, Rima Baukaitė from Klaipėda, Valdonija Karaliūnienė from Veiviršėnai (Klaipėda district), Algirdas Gaižauskas from Dusetos (Zarasai district) and even from the distant Portuguese painter Elena Gruodytė, who came to visit her mother Indrė.

Everyone received a window, a window - two shutters, both sides of which had to be decorated. At the closing of the plein air, each artist stood at his window and told what he depicted, how he was doing, what impressions he had. It is also interesting that all the shutters are different. Some are very traditional, reflecting the images and symbols of folk art, others are artistically meaningful to the idea of artists, and still others are more abstract.

The shutters decorated Daugėliškis. If you drive past, stop by to admire. 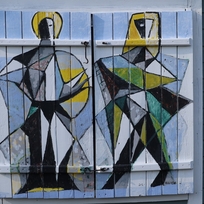 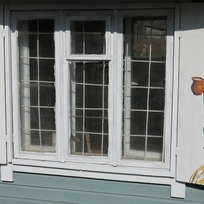 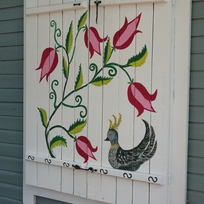 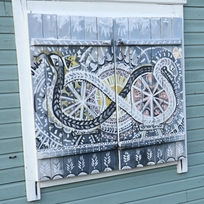